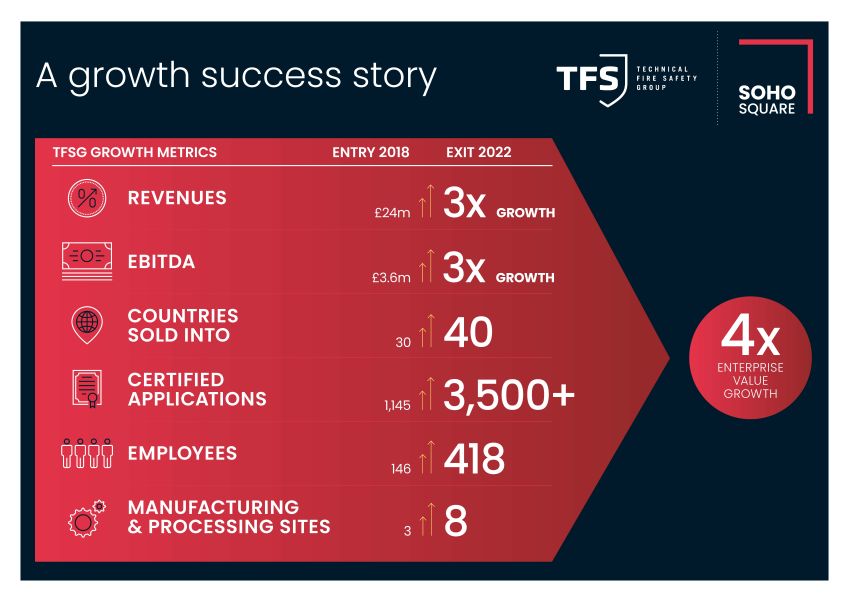 TFSG has grown to become Europe’s market-leading independent fire safety glass specialist, producing, processing and supplying mission critical fire-rated products to over 1,300 customers across 40+ countries, in both the construction and refurbishment markets.

Soho Square originally invested in TFSG in 2018 with a plan to drive growth through investments in R&D, enhanced manufacturing capacity and expansion into new geographies. During the hold period, TFSG has grown rapidly, with revenue and EBITDA both increasing threefold.

Soho Square’s realisation of its investment sees TFSG acquired by svt, an internationally leading provider of preventive passive fire protection products and installation management and restoration management services in Germany. svt is headquartered in Germany and is backed by Ergon Capital, a pan-European mid-market private equity investment fund with approximately €2.5 billion of AUM.

The investment in TFSG, which consisted of senior capital and a minority equity stake, is typical of the type of investment that Soho Square is pursuing in the UK and northern European markets.

“Having been investors in TFSG since 2018, it has been a pleasure to be part of TFSG’s rapid growth journey and to have supported this talented management team in the expansion of the business. Revenue has almost tripled during our hold period as the company has cemented its status as one of the highest quality manufacturers of fire-rated products in the world. We wish the TFSG team the very best for the future and have no doubt that they will continue to flourish with their new owners, svt.”

“Following four years of rapid expansion, I am delighted to be partnering with svt for this next phase of growth. Soho Square has been a forward thinking and proactive partner, readily supported acquisitions and provided considerable investment into expanding the capacity of the business. This has undoubtedly helped make TFSG the successful business it is today. The new partnership with svt will bring clear synergies and cross-selling opportunities and I am confident and excited about the future for TFSG and the wider svt group.”

Soho Square Capital is an investment firm focused on providing flexible capital solutions, typically in the form of senior or preferred capital with minority equity stakes, to established and growing UK and European SMEs. Headquartered in London, the firm is led by a highly experienced team that has been investing together for over 15 years, through many economic cycles and have the expertise and flexibility to invest up to £45 million in any given transaction, across the capital structure, from senior debt to equity. The team works closely with business owners and management teams to structure innovative, bespoke financing solutions and offer enhanced portfolio company support.